Director: Tim Burton
Cast: Michael Keaton, Michelle Pfeiffer, Danny DeVito, Christopher Walken
Plot: As Christmas falls on Gotham, a disfigured man ascends from the sewers, known only as the Penguin (DeVito), wishing to find his true parents. However, Batman (Keaton) thinks there is more to this new arrival than meets the eye.

While Batman boasted Tim Burton’s Gothic style, it is well-known that when Batman Returns came around, Burton was far more prominent a director, making him powerful enough to trim through the red tape of the producers and give us a Batman movie, directly from his dark, creative genius. Therefore, Batman Returns is the true template of a Burton-esque Caped Crusader. When you strip away the Batman side of this movie, you can enjoy picking up on all of the Burton trademarks. From the first scene, characters are depicted as nightmarish stereotypes from the disfigured baby, to the aristocratic parents that throw their baby into the river. Batman movies have never been this gloomy and while it might frustrate the cinema-goer seeking a more generic and logical Batman experience, followers of Burton will love this movie. 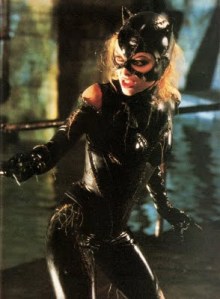 Burton chooses to tackle the Penguin this time around and never as a cinema villain so perfectly suited Tim Burton’s style of cinema. The Penguin could have very easily have been the tragic anti-hero of his own movie, when Burton is in the director’s seat. Outcast by a world that didn’t understand him, he remains more pitiful than evil until the very end, when his sanity breaks under the strain of his segregation. It was a clever choice to make up the easily-overlooked, but just as worthy of the Batman canon, Shreck (played by Christopher Walken, a man who understands Burton’s style and uses it to deliver one of his greatest performances), as the man who stands in the Penguin’s ear and manipulates him into carrying out his evil deeds. The Penguin is grotesque, disturbing and stands alongside other Gothic characters from Burton’s imagination, like Edward Scissorhands and Beetlejuice. However, Tim Burton not only squeezes in the story of the Penguin’s downfall, but takes Catwoman on as well, in the form of a show-stealing Michelle Pfeiffer. I have never liked Catwoman in the comics, but Pfeiffer is impossible to hate. She is a timid woman broken by Gotham City. Her origin story is sketchy at best, but Burton’s style makes it easy to overlook the gap in logic. Pfeiffer steals all of the best lines, provides most of the emotional resonance of the movie and will go down in history as one of the best superhero females of all time. Halle Berry never stood a chance.

However, Burton’s style not only makes these characters impossible to forget, but his style also tells the story so well. Some might not get this movie, because of the broad strokes that Burton paints the picture with. It took me a second viewing to truly understand where the director was going with his vision. However, once you have allowed Burton to win you over, it becomes fun to take in the gothic caricatures we are presented with. Subtly is abandoned, so we get the villain of the piece, Shreck, wanting to steal the city’s ‘power’. The Penguin snatches babies, either to win the public over as a hero or to steal them of the first-born sons, coming right out of the gothic Christmas stories Burton cherishes, or even the bible if you want to make that connection. Burton’s fantasy style also makes any nonsensical plot points irrelevant. The Penguin’s goons are stupid one moment and then able to dismantle the Batmobile when the scene demands it. However, moments like that do not matter to us. 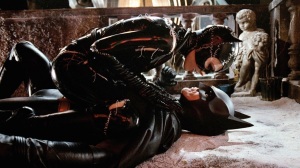 But what of the actual Batman? Well, sadly, the film kind of forgets about the actual reason we all turned up. Burton has so much fun with Penguin and Catwoman’s origins that Bruce Wayne barely turns up, unless someone needs punching. Michael Keaton has very little to do here other than a small love story with Selina Kyle, something that needed more developing – maybe the one place where it would have helped if Burton took his foot off the Burton-meter slightly. Even when the Bat finally shows up, the story isn’t ready for him. It is almost as if Burton suddenly remembered the Dark Knight and shoe-horned him in. He is suspicious of the Penguin for little to no reason; on the flip side, Catwoman and the Penguin seek vengeance on him, before the Batman has ever truly become a problem. Sure, when the finale happens and we get more Bat gadgets than ever, it feels a bit more like the Batman movie we showed up for, but seeing as this is as good as we are going to get in the Batman movie field for some time, it would have been nice if Keaton was allowed to make a bigger impression.

Final Verdict: Brilliantly Burton with a tremendous depiction of the Penguin and Catwoman. Not for everyone, but a stylishly glorious film if you can stomach Burton’s style.

9 thoughts on “Batman Returns: The Review”