Hostage movies always sound so good on paper. The tension is always dialled to a high, as the characters always seem moments from being killed off. The hero and the villain have an unlimited amount of time to bounce off each other, a dream for actors hoping to get onto the memorable action movie stars wall of fame. And it also seems perfect for the American family man, who wants to see a father go to extreme lengths to protect his loved ones. However, very rarely do they ever work out, and Firewall is a good movie for show where these stories go wrong. 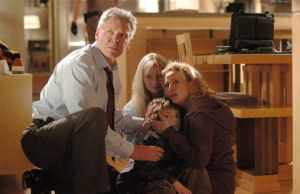 Don’t get me wrong, the hostage story is a good one; it’s why I bought the movie in the first place. It’s just that a hostage situation is in many ways, a stalemate, and before long, you realise that the majority of this film’s running time will be made up of these stalemates. Every movie I have seen with this kind of premise always starts strong and then twenty minute in seems to figure out it has bitten off more than it can chew. That’s where the clichés start to come in. The family making a desperate dash for freedom, the father testing the boundaries of how good their captors truly are, and the inside man element? Are one of Stanfield’s friends or colleagues involved? Sure, it might seem good the first time, but they have all been done before and Firewall’s biggest problem is that it doesn’t break any new ground. Most of Firewall is made up of a great start, a massively routine middle, and a, to the film’s credit, decent finale fight. If your expectations are low, there is no reason why Firewall won’t appeal to you, but don’t come expecting a memorable action.

Actor-wise, Ford and Bettany are the only ones worth turning up for. Everyone else are glorified cameos or red herrings. Robert Patrick and Alan Arkin go through the motions. Nikolaj Coster-Waldau is competent, but seems to be praying that an award-winning series about King-Slaying is around the corner. Virginia Madsen spends the whole movie tied up and gagged. Even Ford and Bettany have been a lot better. Harrison Ford has done this role so many times before (Patriot Games, Air Force One), so there is a sense of apathy from the actor. He handles the material well and we totally believe, relate and like his character. It just feels like there is a lack of a spark that used to make Ford so amazing to watch on screen. Long gone are days of Han Solo and Indiana Jones. Paul Bettany probably winds up as the best actor here, but even he is working with an unimaginative character. His only motivation for being the bad guy is the fact, he is English and has a creepy, sophisticated voice. While Bettany wants us to believe his villain is dangerous, the script keeps making him too lenient with his hostages. When catching the son making an escape, everyone gets a rap on the wrist and then it is back to events as usual. Again, another sign that most of this movie is a dull stalemate.

Final Verdict: Little more than a routine action. Predictable and cursed with a heavy middle act, although it isn’t a total disaster.

4 thoughts on “Firewall: The Review”