TV is one of the more successful mediums out there, because it is a lot of people’s favourite form of entertainment. Although I am a movie guy myself (mainly because Oracle of TV is a crap name), I can appreciate the reasoning they have. With a TV series, we spend more time with the individual characters, connecting with them more than people who only have a feature-length movie to finish a successful character arc. We feel closer to them and, for that reason, specific television series will always have a special place in our hearts.

However, when these characters get so three-dimensional, it is always tempting to take their personalities into another medium. Most TV shows try to break into the cinema (which rarely ever works), but sometimes, a TV show will think outside the box and bring out a novel based on the show. Does this work? Well, sometimes. Therefore, I have compiled a list of three different TV show books that I have read and sorted them into three categories: bad, OK and good. Let’s dive in.

THE BAD – DOCTOR WHO

Take this entry with a pinch of salt. I have read two Doctor Who books in my lifetime and I realise that there are so many, they could have drastically improved by now. However, after reading two mediocre Doctor Who novels, I refused to seek out a third and just assumed that the entire idea of a Doctor Who book was flawed. Especially as both books fell down on the same mistakes.

I think the main problem with Doctor Who is that we should never see inside the mind of the Doctor. He should be a distant character and we should never know how his mind works. The best thing about the show is the characters being faced with an impossible challenge, but the Doctor works it out effortlessly and we are left scratching our heads trying to figure out why. With a book, we get the Doctor’s internal monologue and it spoils the fun, when we know how the magician performed the trick. It is the same reason I am not as fond of the James Bond books as I am the films. However, the only available answer is to throw us into the narrative of the companion. One book I read of Doctor Who featured Rose, the other Martha. I am not saying that both characters are irritating, but the very reason the Doctor has companions, from a writer’s point of view, is so the Doctor has a reason to explain things, making the show easier to follow. Therefore our narrator is often asking stupid questions that hamper the action.

Also, I think Doctor Who is a fairly visual story. At the risk of sounding like a child that needs pretty lights to be entertained, I like my Doctor Who with bright, shiny things and explosions. Most of the new Doctor Who features running from interesting monsters, something that the books cannot really pull off as well, as I think they want to. Also, the books are pretty much your typical filler episode, meaning that you enter the books knowing that nothing game-changing is going to happen. At the same time, I should have known this would happen. The books were meant for teens (at the time, I was 17, loved Doctor Who and wanted a quick read for a trip to the beach). I read each book in a day and while they were, at best, enjoyable, I couldn’t help but be left craving more.

THE OK – THE WALKING DEAD

The Walking Dead books are more interesting than good, if that makes sense. Let’s start with the bad points. One, I personally don’t think that zombies work well in book format. They are a fairly visual enemy, brought to life by their hollow humanity and decaying corpse. It takes a skilled author to echo that with pen and paper. There are no real jump scares. The Walking Dead books are made up of several moments, where characters are talking, while the writer jumps scene to describe the unseen zombie horde coming in from the left. Maybe some might like that, but personally I just read these scenes and wished I was watching it (or reading it in comic book format). The other bad point is that these books are usually origin stories (the Governor or Lilly from the comics). It means that there is really only one character worth follow and everyone else is fair game for some bloody death. Of course, this all happens in the second half of the books, making the first half more window-dressing than worthwhile reading.

However, what the books do succeed in doing is improving the season. I whole-heartedly recommend reading ‘Rise of the Governor’, because it tells the origin story of the Governor really well. There is a twist at the end of the book, which shakes up everything you thought you knew about the character. I loved the book, because when watching Season Four of the TV season, I had a little fact in my mind that made certain lines so much more resonating. If you love the Governor as a villain, then this book becomes essential reading.

Castle is a season about a writer who manages to get a pass to spend his free time shadowing a police unit, so he can write up a book on his latest character, hardened detective, Nikki Heat. Of course, this is just an excuse to flirt with the actual cop, Beckett, but Richard Castle does actually bring out a book each season. They mention it from time to time, discussing certain chapters and twists. Little did I know that the books are actually available to the public and the chapters and events mentioned in the films genuinely do happen! 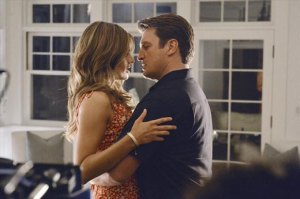 The books are fantastic, because they make the TV show so much more three-dimensional. We are given a pretty standard crime novel, featuring a clichéd team of cops and a journalist tagging along. But, of course, everyone who watches the show will get small shudders of joy whenever the television show is referenced. Every time, Nikki Heat contemplates the way this journalist looks at her, we know that this is Castle wishing that Beckett would feel the same way in ‘real life’. As an English Literature graduate, who studied avant-garde fiction, I am amazed at how a single line could have so much resonance and meaning in both the book and the show. It is like watching ripples in a pond and it suggests just how clever the writers are.

In all honesty, the book isn’t even that good. The writing is a little cheesy, filled with forced metaphors. A good writer can write a decent metaphor, turning a simple action into a poetic quote. A great writer understands that readers don’t want to spend an entire book, reading bullshit metaphors, unless they have a greater meaning than making the writer look clever. The characters are fairly two-dimensional (basically hollow versions of Beckett and Castle). However, that isn’t the point. The point of this book is to take a much-loved show and make it feel more real, more three-dimensional.

Oh, and that sex scene in the first book they talk about in Season Two? It really lives up to everything they said about it. Cold showers may be needed…