I have been playing Skyrim a lot more recently. I never could get along with the game mechanics, but, out of boredom, I began piling hours into it and suddenly, I simply got it. I began storming through the game, suddenly understanding every little detail about the hype that surrounded this game when it first came out. And while I could praise it until the cows come home, this article is not about that. No, this article is about the little flaws that Skyrim has that keep cropping up and annoying the hell out of me. I really do love this game, but now the hype has died down, I think it’s time to take a proper analysis of this game and where it goes wrong.

Games have glitches; I get that and I accept that. Hell, a game like Skyrim was always going to have glitches. It’s so huge that some cracks in the game were going to slip detection and make it into the final copy. There have been reports of dragon’s movement protocol getting messed up, so the dragons end up looking like drunken pilots. These are the glitches I like; sometimes mistakes in a game can make a moment that is genuinely unique and hilarious. However, the main type of glitches in Skyrim aren’t warped pieces of code, but genuinely broken levels. 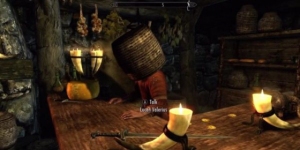 The main one I have found is Alduin, the main boss of the game, refusing to spawn. He simply will not appear when he needs to. When you head back through time with the TARDIS scroll, there is a tense moment where the heroes of old are fighting Alduin. The moment is built up, and built up, and built up… oh wait, that’s not tension; the game is genuinely broken and the characters are stuck with this looping animation until Alduin shows up, which he never does. This is not the only moment in the game where this has the potential to happen. You end up reloading your save points and potentially losing a lot of gameplay. This is when glitches become a problem.

Or sometimes quests refuse to go to the next point of the game. Has anyone else completed a quest, only for the marker to not update? I will collect a piece of evidence and the marker will still hover over this empty chest, not allowing me to go to the next stage of the mission. It’s not even just the marker: the entire quest doesn’t register the change in story. There are also points where you are meant to follow a character to get to the next part of the quest and that person will refuse to move. He will stand there, urging for you to rush to the library with him and he will just remain still, with a dazed look in his eye, as if he is drunk out of his mind. Luckily this hasn’t happened with a quest that is overly important, but my OCD at a mission I cannot complete drives me mad. I also have a paranoid fear that one day this will happen to a quest that is vital to the main story.

This isn’t so much of a flaw as a small disappointment. When Skyrim first came out, one of the main things people raved about was that the universe worked under its own steam. You could be wandering through the forest and you would stumble across a giant fighting a dragon. You did nothing to trigger this event; the world of Skyrim just collided together and brought together this amazing clash of the titans. You think to yourself how lucky you were to bump into this fight and witness it. This awesome sight could have gone unseen, yet the developers still put time into it. I bet you’ve heard stories like this before. And I bet that example has always been giant vs. dragon.

See, the game isn’t really randomly spawning it. It figures out where you are and when you walk into the location where this battle is meant to take place that is when the giant and dragon spawn (or more likely just the dragon – giants usually remain in place throughout the game). The same way that random fox that runs by you as you first leave Helgen is planned. You see, the universe still revolves around you, which in fairness, is like every other game, which is why I do not really see it as a flaw. However, seeing as a hype was built around this universe working on its own accord, I feel I have walked into a conspiracy by developers, where I have uncovered this massive lie.

On one hand, Skyrim is really imaginative. We have all of these races, monsters and religions. Time has been spent crafting the fifth Elder Scrolls game and you have to appreciate that. However, as you really throw yourself into the game you cannot help but notice certain areas that could have had a little more work put into them.

My main point is that every village seems to get lazier. You first show up in Whiterun, where almost every character has some sort of story, even if it is ‘womaniser’ or ‘crazy priest’. There is a divide between two Nord families and you could easily spend your first three days of straight gameplay sorting out the various problems in this town. Then you go to the next city, let’s say Markarth. It’s still pretty imaginative, with a conspiracy theory style of story, but there are less interesting characters. Several people are just empty bodies, making the city look bigger and busier than it actually is. Solitude is pretty much nothing but these empty bodies. There are a few stories, the same divide between two factions touch, but nothing as exciting as Whiterun. Every bar looks the same. Before long, Rorikstead will be a dead town, an area where there is nothing you can do to progress the plot.

And don’t get me wrong, there is still a lot more to do in Skyrim. I can live without this extra time put into the game. Like I said, this article is about the small criticisms, nothing that can take the torch away from its place as one of the most exciting games of this generation. But Skyrim’s main problem is that whenever we see an area of it that has fallen due to laziness and lack of time, we cannot help but point to the massive stockpile of needless books littered throughout the game and wonder why so much time was put into them and not making some of the background characters a little more developed.