To fully review how complex the plot of Orphan Black truly is, I am going to have to include some spoilers covered in the first two episodes. If you really want to enter this series with no knowledge to the premise, then read no further than this paragraph. However, if you want to take something away from this article, here is the bite-size version of the following review: you will not regret watching this show. 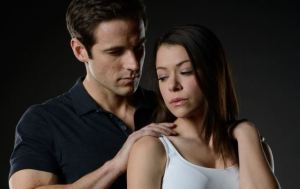 Here’s the premise. Sarah Manning has been dealt a bad hand in life. She is a foster child with a child of her own that her foster mother doesn’t truly trust her with. She is involved with a boyfriend she doesn’t really want that deals drugs. She needs a change. And then she witnesses a woman, who uncannily looks just like her, jump in front of a train, leaving her belongings behind. Sarah seizes the chance and takes her identity, making her foster brother identify the body as her own. However, she soon realises that the jumper is a cop, Beth Childs, under suspicion of shooting an innocent woman. Realising that there is a large sum of money in her bank account, Sarah tries to con her way into that money to take her and her daughter far away from her crumbling life. However, before long, bodies start showing up and she discovers that she is a part of an experiment into clones.

Yes, clones. That is the twist here. I hate to spoil this for you, but there are plenty more twists and turns in this story to keep you entertained. This is the kind of series that asks you to keep up, which can be a struggle, but if you can match the speed of this season, then you will be entertained thoroughly. We have government conspiracies, religious nut-jobs and suspicious police officers. On top of that, we have a great character piece of a girl-gone-bad, who just wants to do right by her daughter. This season crams so much in, yet it never feels like too much, as the talented writers keep everything ticking over smoothly. You might get lost in the confusing world of clones, but that is part of the fun.

The best thing about this show is the fantastic lead actress, Tatiana Maslany. The actress takes on one of the most diverse and complicated roles I think I have seen in a long time. She is asked to impersonate several clones of herself. As well as playing Sarah Manning, who is a tough character to portray in herself, she takes on Cosima, your techno-babbling narrative device, Helena, a clone-gone-bad and, maybe the most amusing of all, soccer-mum, Alison, whose world crumbles around her, in hilarious fashion. Yes, this is tough, but it has kind of been done before. But then, Tatiana Maslany is asked to play each clone pretending to be another clone. For a lot of the first half of the season, Sarah Manning is pretending to Beth, the dead cop, and later, Alison impersonates Sarah. The story criss-crosses each character brilliantly, getting the most out of every key part of the series. And I think Tatiana Maslany’s performance deserves a lot of the credit for that. If there is any justice in the world, awards should be flying her way. 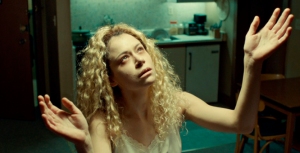 I also enjoy that despite this complicated plot, Orphan Black never forgets the small things. The soundtrack is excitingly fresh, creating a distorted sound that matches the premise very well. Every now and again, the camera will pulse slightly, creating a dizzying effect. It is a good piece of direction and is another sign that this show really knows what it is doing. However, best of all, it is funny. Yes, on top of all of these plot points, twists and turns and character pieces, the writers add a touch of humour that really keeps you invested. Shows like this often get so lost in their narrative and clever writing that they alienate the viewer. However, this never happens here. A sharp script drops the right line of dialogue at exactly the right time. All in all, Orphan Black is a refreshingly great piece of television.

Final Verdict: Quite frankly, this show is outstanding. I am hooked and cannot wait for the next season.