Director: Seth MacFarlane
Cast: Seth MacFarlane, Mark Wahlberg, Mila Kunis, Giovanni Ribisi, Patrick Stewart
Plot: John (Wahlberg) is granted a wish to make his teddy bear come to life, but when he reaches the age of 30 and that teddy bear takes up drugs and muscles in on his relationship with Lori (Kunis), life becomes a problem.

I didn’t actually have too much faith in Ted. Don’t get me wrong I love what MacFarlane has done with Family Guy, but despite what the hard-core fans tell you, it is little more than a simple distraction. It works best as a twenty minute run of rude and easy jokes. I had doubts that this could work as a feature-length movie, but MacFarlane had the directional prowess to alter his style just enough to make it work and Ted is, quite simply, a fantastic comedy.

I keep remembering, and by default, instantly forgetting, that this film, in many ways, is a Christmas movie. The first scene shows us the young John Bennett getting a teddy on Christmas Day and wishing it to life, creating Ted. Sure, the film moves on from Christmas day, but I feel it still has the same whimsical fairy-tale like basis of the popular Christmas stories, even if it spirals into a story about two stoners and anal jokes. It also becomes a story about friendship and its natural evolution. Bennett is a guy trying to move on with his life, taking his relationship with his easy-to-love Mila Kunis (to hammer home my point in my ‘About Time’ review, I’d hire her as my romantic lead over Rachel McAdams any day), to the next level, but Ted’s partying ways are too fun to turn down.

I thought the clever thing about this movie is that when it came to picking between Ted and Lori, the same choice that John is making, MacFarlane had us understanding the pros and cons. Yes, he should let Ted get on with his own life, but at the same time, we, as viewers, wanted to see John Bennett go to a party with 2012’s best cameo appearance. It was clever of MacFarlane to not let Mila Kunis’s character become that female lead it is easy to hate, as she is getting in the way of a fun time. No, we never disliked Lori, which was good. It gave a warm human element to the film, as it was very clear that John, Lori and even Ted, were real. Unlike Family Guy, there were no two-dimensional characters that the movie needed to rely on, so Ted, as a comedy stands firm.

It’s not just the characters; the performances are all great. Seth MacFarlane is, of course, the main draw here, bringing us another outrageous yet loveable character. Ted is foul-mouthed, offensive, but it is impossible to hate the little guy. My personal star of the show, however, is easily Mark Wahlberg. The actor isn’t everyone’s favourite, often being the scapegoat for several flopped movies recently, ‘The Happening’ and ‘Max Payne’. However, here he shows his comedy chops and it turns out the guy is amazing when it comes to the easy laughs. His Boston accent is easy-going and his laidback nature makes him a really easy guy to relate to. While Ted might provide most of the laughs, John is the heart of the movie and it is to MacFarlane’s credit that he writes an interesting character in John. Many other writers would have given the animated bear the crux of the movie and left the human co-star struggling to keep up. Luckily, MacFarlane is too wise with his material to do this. 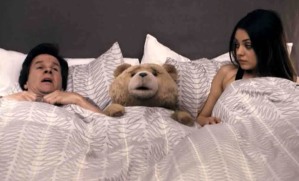 I am not sure if I like the ending or not. Ted has a clear moral to it, being that Ted is his own worst enemy. However, trying to be more like a movie, MacFarlane needs to write in a villain, turning to the ‘go-to actor’ for unhinged weirdoes, Giovanni Ribisi. It’s not particularly bad, but it feels a little unnecessary and almost comes across as a race to the finish line of the movie. Almost as if the climax is going through the motions, rather than actually meaning anything. I am sure if time was spent on this script then a resolution that didn’t have a bad guy could have been figured out. On the plus side, we get to see Mark Wahlberg punch a fat kid.

Final Verdict: Non-stop laughs, yet the characters are not lost under the humour. A welcome debut from the TV genius, Seth MacFarlane.

2 thoughts on “Ted: The Review”