Director: Edgar Wright
Cast: Simon Pegg, Nick Frost, Paddy Considine, Martin Freeman, Eddie Marsan, Rosamund Pike, Pierce Brosnan
Plot: Old school friend, Gary King (Pegg), returns to his hometown to complete the pub crawl that thwarted him and his mates as kids, but he is not as welcomes as he thinks.

Edgar Wright, Simon Pegg and Nick Frost have become a very talked about combo. First, we had the hit TV series on Channel 4, Spaced. It was different, amusing and happily showcased their talents. They followed that up with a feature film powerhouse, the memorable Shaun of the Dead, showing how clever they were at distorting genres. Anyone that doubted their talents were proved wrong by the incredible Hot Fuzz. ‘The World’s End’ marks their final outing together, at least for the Cornetto Trilogy, making it one of the most anticipated comedies of 2013.

The first thing to note is that Gary King is Simon Pegg’s most interesting character in the trilogy. While Spaced and Shaun of the Dead saw him as the loveable slacker and Hot Fuzz saw him as the impressive action hero, here Pegg is given a bit more to do, acting-wise. Gary King is that one friend you all remember, who is trapped in the past and views the silly things you did as a kid as the best days of his life. He heads back to the hometown of Newton Haven and rounds up his old friends to finish the pub crawl they failed to finish as youngsters. They end up agreeing to come along, but are soon worried about King’s intent to finish the crawl. 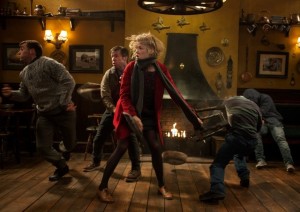 This is a good movie, a very good movie, in fact. However, ‘The World’s End’ begins to fall apart when you place it against the rest of the trilogy. The jokes here are good, but there were much more, and better ones, in ‘Shaun of the Dead’ and ‘Hot Fuzz’. The trilogy’s strengths evolve into its weaknesses. Every time this movie does something right, the rest of the trilogy stands there, doing it much better. Take the cameos for instance. Hot Fuzz was fantastic with its cameos and it is clear that The World’s End tries to do the same here. We have some of the best British actors with bit roles, like David Bradley, Bill Nighy and Pierce Brosnan, but the story doesn’t really give them much to do. Hot Fuzz allowed for all of these actors to work their characters and because ‘The World’s End’ is a much more confined film about these specific characters, it doesn’t work as a cameo-event. Sorry, Pierce, but Timothy Dalton wins when it comes to the Battle of the Bonds.

I think this also becomes more of a character piece than a comedy. Simon Pegg, and everyone for that matter, flexes their acting muscles and come up with some really interesting characters. However, while it is a smarter script than the previous two movies in that aspect, it hurts the comedy side of things. It’s like Gary King’s desperation to complete the pub crawl. I know that it is a metaphor for alcoholism, but by the final three pubs, you will be rolling your eyes at the excuses the story comes up with to get Simon Pegg into the next bar. The ending is also a bit (to borrow a word from another blog ‘StuartReviewsStuff‘) ‘punchtheair-tastic’. I guess it works in the moment, but on reflection, it was a bit much and the epilogue of the film might make people lose touch with the film they just saw.

Maybe this review is making it sound like I disliked this film, because I didn’t. In fact, I thought it could be a clever and funny one. I enjoyed how each pub name related to something that happened in that pub (for example, ‘The Hole in the Wall’ saw Paddy Considine drive a car through the wall). I am sure I will be re-watching it soon to try and figure out the name-checks I missed. The fight scenes (yes, there are fight scenes, thanks to an amusing and unexpected twist), were fantastically portrayed. The first one avoids cutting away until it absolutely has to, creating a wild, crazy spectacle. The jokes are as witty as ever, even if we have partially wised up to Edgar Wright’s style of joke-telling. I think this film works really well in the moment. It ties up the trilogy nicely with added emotion and morals. It just doesn’t really hold itself up when you reflect on it.

Final Verdict: A great end to the Cornetto trilogy, although as a stand-alone film, the other two are more tempting a watch.

2 thoughts on “The World’s End: The Review”