Director: Clint Eastwood
Cast: Clint Eastwood, Bee Vang, Ahney Her
Plot: Walt Kowalski (Eastwood) begrudgingly lives in a street inhabited by mostly immigrants. However, when he gets involved in an accidental act of heroism, he becomes a reluctant idol for the street.

Clint Eastwood has become one of the biggest players in the Hollywood area, mastering any role handed to him and even becoming one of the most talented and unique directors on the scene. Gran Torino, at the time, could have been said to be his closing role, as he bowed out of the movie scene and into retirement. A grand choice, because Gran Torino is the role of a lifetime.

When Walt Kowalski’s wife dies, Walt’s life takes a turn for the worse. Without her good-natured spirit, his neighbours fear for his sanity. He spends his time alone, dodges his son, who tries to put him in a retirement home and puts more love into his Gran Torino than anything else. When he defends his neighbours against a bad-tempered gang, they praise him as a hero, forcing Walt into a spotlight he doesn’t really want. As a tradition, the Hmong community give him their youngest to work for a week with Walt, forcing him to spend time with the immigrants he so easily insults. It is a touching character piece, that warms even Kowalski’s stone heart.

Walt Kowalski is pretty much Dirty Harry if he lived to retirement. Grumpy, a loner and able to intimidate anyone with little more than a snarl. Eastwood wears the role brilliantly, knowing every little quirk that Kowalski would pull. Some might call it arrogant to write the dream role and cast yourself in it, but Eastwood is merely working with what he knows he can pull off perfectly. Granted, there is a holistic approach to Gran Torino, as Eastwood can work out every angle he wants from this film. Besides, if you were casting the role of Kowalski, Eastwood wouldn’t just be your first choice, he would be your only choice. 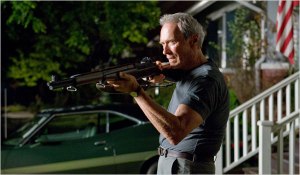 Anyone else would sense the opportunity to turn this movie into a quirky comedy. A disgruntled veteran living next to a Hmong community pretty much screams ‘I smell a sitcom’. Thank god, Eastwood seems the least bit interested in making this a comedy, which is good, as it would turn Gran Torino into an average, forgettable flick. This is a serious character piece, never even considering lowering itself in order to make a cheap joke. In all honesty, the film is amusing from its seriousness. Walt’s grunts can be hilarious, when perfectly timed and some of the racist slurs that Eastwood rattles off effortlessly can reduce you to disbelieving tears of laughter.

The film’s biggest strength is somehow its biggest weakness as well. Eastwood is so perfect and meticulous with everything he does, the rest of the cast are drowned out. Bee Vang isn’t a good enough actor to really stand up to Eastwood. Sure, the character is meant to be timid and quiet, but Vang’s portrayal comes across as awkward and nervous. You want someone for Eastwood to elegantly bounce lines off, but Vang is never that guy. Thankfully his sister, played by Ahney Her, is a much more efficient actress. She is the moral stand-point, who suffers for it at the midway point of the film, and despite playing the movie’s victim, comes across as a strong-willed, likeable character. Her struggles feel more like being slowly crushed by the seediness of the world, rather than your typical damsel in distress. Eastwood is far too good to play that card.

Another flaw is the slow middle of the film. As soon as we’ve summed up the character of Kowalski and the humour dies down, the film tends to drag its feet. You might be checking your watch as Eastwood tries to make a man out of Bee Vang. Again, maybe if Vang’s acting was up to the job, then this film would have felt better paced. Thankfully, the ending is phenomenal. This could easily be a homage to Eastwood’s westerns of old with a climatic stand-off, involving the bloody slaughter of the gang that have terrorised the street. However, Eastwood doesn’t take the obvious route and his choice of ending is bad-ass in its own way. This film is definitely worth a watch.

Final verdict: Eastwood’s perfect role. Walt is a horrible yet loveable character, who comes across as a grizzled bad-ass hero.

One thought on “Gran Torino: The Review”