Boba Fett is my favourite Star Wars character. Even though, when you break it down, there is little evidence in the three original movies to prove that Boba Fett is anything other than an incompetent thug, he still has managed to win his place in the heart of almost every Star Wars fan out there. Extended Universe aside, he has cool armour, the best gadgets and there is a sense that there is more to be explored with the character.

Then I heard there would be a Fett movie. Disney has announced that while writing up a third trilogy, there would explore the Extended Universe with one-off films, spread throughout the next few years. Boba Fett will be one of the lead protagonists in one of these Star Wars spin-offs. At first I was over the moon… and then I thought about it. You see, I don’t think that movie will be too good for the Star Wars canon and could hurt the character in the eyes of the fans. I have come up with three arguments for why there shouldn’t be a Boba Fett stand-alone movie.

3 – FETT WORKS BETTER AS A SIDE CHARACTER

Quick, who is your favourite Lord of the Rings character? I wager that most of you will have Legolas in your top three. Why? He’s so awesome. He can hit an arrow anywhere he likes from whatever distance, is super quick and seems to be one of the most victorious heroes of the trilogy. If you had to choose one character to have your back in a fight, it would be Legolas. However, no one wants to see Legolas the movie. Why? He is a skin-deep character: there is no bigger story there to explore and he is just known as a bad-ass. This isn’t a bad thing; it’s just the way it is. 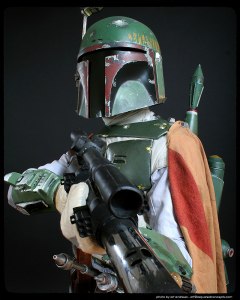 I cannot get over how cool this guy is!

The same goes for Boba Fett. He is known as an awesome character. He always gets the job done. However, we don’t want to see a character that always gets the job done. It’s another reason I am kind of worried about the upcoming Man of Steel movie. Superman has always been too perfect to have a real conflict in his films. Boba Fett is the equivalent of that in the Star Wars universe. If the writers try, then we have a problem, because…

I know the exact storyline that will be used. Unless the writers make a story not already crafted by the Extended Universe, the obvious thing to do would be to take the Fett novel, set after his ‘death’ at the hands of the Sarlacc. He is found, near dead, by rival bounty hunter, Dengar, and is nursed back to health. He then goes onto to do some epic stuff that will be awesome in a movie. If I was writing the movie, this is what I would do with the film.

But this is also the problem. Boba Fett is nursed back to health and his bad-ass nature is slightly lost on the audience. The film opens and we see this legendary Bounty Hunter crippled. Sure, he still is pretty cool and some bad-ass stuff can still be done, but the best thing about Boba Fett is that the movies paint him as an unknown element. He is a god-like figure and that image is destroyed, when we see that God figure bleed. Having him in a movie portrayed as someone that can be injured or destroyed would lead to…

1 – THE MYTHOLOGY BEING DESTROYED

Most people like Boba Fett because once upon a time, he was a character that you would struggle to remember. He was a side character, who probably has less than twenty minutes of screen-time, if you added the entire footage of the character throughout the trilogy. It made the character exciting. It is why the character isn’t particularly vital to the film. I don’t think Lucas intended for him to become this major cult figure. It just happened. But this will be lost if suddenly this minor character evolves into one of the major players in the franchise. 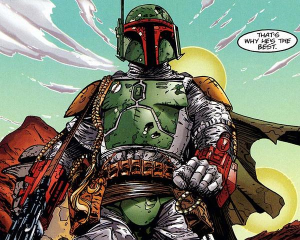 Where is that speech bubble even coming from? Fett’s mind? God?

This is a case of Indie becoming the new mainstream. The second something becomes the public norm, we lose a little love for it. It’s sad, but it’s the kind of thing that happens to small-time bands when they get big. I worry that is going to happen for Boba Fett. The best things of life are the things that leave us wanting more. This potential movie will kill off any demand to see the character. We kind of got this with Jango Fett, but thankfully the image survived. Sure, include Fett in the new trilogy: I would love to see that. But don’t over-do this love for the Fett. You could kill one of the corners of the Sci-Fi universe.