For the last two weeks, we have been pushing out way through the top 15 Bond villains, trying to see who the best of the bunch were. Well, good news: we are nearly there. In theory, these last five villains should be the very best the world of 007 has to offer. I can almost guarantee that there will be some controversy here, but after three weeks of this, I am confident that the winner is deserving of his place.

Am I wrong? Maybe your favourite didn’t even make the top 15? Defend your argument in the comments below.

Character: Everyone loves Oddjob. Everyone. In the books, he is one of the most memorable characters and everyone loves the bit, where Oddjob crushes the golf balls in his hands and then cuts off a statue’s head with a fricking hat. Even Bond looks pale at that point, as if he is unsure if the scriptwriters are joking or not. He is the perfect evil henchman and a cornerstone in the Bond universe.

Well, I wasn’t wearing this hat for fashion, was I?!

Movie: I’ve already talked about how awesome this movie is, so I will keep this brief. Goldfinger is one of the highlights of the Sean Connery era and was a near-perfect movie. And I think Oddjob helped that happen by being one of the first villains that we actually thought could kill Bond.

Death: Shocking (no pun intended – well, OK, yeah it was). A fantastic tense fight that was scripted perfectly. It was more Bond trying every trick up his sleeve to kill Oddjob rather than a straight fight. Oddjob just took every punch, grinning madly. It showed us that Bond wasn’t just a strong spy; he had smarts too. That was literally the only way he was ever going to beat Oddjob.

Character: Silva was always going to get into the top five. I am sure some of you think he should be taking the pole position. He is scary, motivated and intelligent. He brought a real atmosphere to Skyfall and his opening monologue was one of the best moments in the movie, maybe all of 2012. The one reason that he isn’t first is because I was never really convinced by his big plot. It seemed a tad lazy of the writers and let the film down as a whole.

Movie: Skyfall was awesome and a brilliant return to form for Bond. It was everything we had been wanting from Bond for a while now, with an anniversary vibe to the script. Again, the plot sometimes dipped, but otherwise, big thumbs up.

Death: Again no shoot-out, a sign that the new Daniel Craig era has matured. We were given a few good punch-ups with Silva’s guards though, so all is forgiven.

Character: I love Elektra. Although the big twist that she was the real villain wasn’t as well-hidden as it thought it was, it was still a big impact. She is the first female to head the bad guys in a Bond film and she makes a good duo with Robert Caryle’s Renard. Some may disagree with this, but I don’t care, because this is my list and I think Elektra deserves to be in the top three for a fantastic performance.

Death by gun? Or phone?

Movie: Again, I have mentioned that World is Not Enough was a good film, so I will awkwardly ignore this sub-heading. La-la-la.

Death: We were never going to get a cool fight with this character, but the stand-off was cool and gave us an emotional turn. It would have made more impact if Bond’s ratio with women wasn’t three each movie on average, but the writers tried their best.

Character: 006 is awesome. Sean Bean is awesome. Again, the twist wasn’t as secret as it thought it was (don’t put Sean Bean as the second name on the opening credits and expect us to believe he died five minutes in!), but the character as a whole saved that. What we really want with a Bond villain is a polar opposite of Bond and 006 is definitely that. He is Bond gone wrong: the kind of person that a few rogue mission could turn Bond into. Every time he goes renegade (all the time if we are watching a Daniel Craig film), this is what MI6 thinks he has become. It’s a chilling depiction.

Movie: Goldeneye is the best Bond in my books. The action is perfect and the villain is amazing. That is all I have to say on the matter.

Death: Being Sean Bean, he gets two deaths. Typical. In all seriousness though, the final fight in this movie was amazing and is one of the highlights in the entire Bond franchise for me. It’s just the way he dies.

Character: But Red Grant is by far the best villain ever to grace the Bond universe. Sean Bean may have got the anti-Bond well, but Red Grant is all that and more. He is cool, calm and just so damn awesome. ‘From Russia With Love’ lacks a principal villain, but somehow Red Grant makes up for that. He is fantastically portrayed by Robert Shaw. 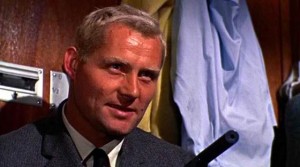 I best you wish you had a Tom Jones tan like me, don’t you, Mr. Bond.

Movie: Not only Bond, but cinema in general, has been trying to replicate the tense train sequence for years now, without success. There is just something about this movie that gets the tension, pace and threat just right. It is one of the most iconic film moments, especially in the Bond universe.

Death: Brilliant. The final fight is nail-biting. Bond and Red Grant are so evenly matched we are unsure of who is going to come out of it alive. Bond only barely manages to with the benefit of his gadgets. A tense, claustrophobic, and brilliantly directed showdown between two great characters.