Director: Jon M. Chu
Cast: Dwayne Johnson, Channing Tatum, Adrianne Palicki, Jonathon Pryce, Ray Stevenson and Bruce Willis
Plot: When the Joes are ambushed and wanted for treason, the team decide that the President is an imposter, with a devastating plan up his sleeve…

It’s no secret I found the first GI Joe movie underwhelming. There was so much going on, yet I couldn’t connect with the film. Don’t get me wrong: the same problems are going on in this movie, yet it feels neater and more grounded. It is definitely an improvement.

The film kicks off from the first movie, where Zartan (my favourite villain in the first), has kidnapped and replaced the President. Using this new position of power, he proceeds to wreak havoc and try and free his old boss, Cobra Commander. Other than that, the movie is pretty distant from the first movie. While we are treated to the same bad guys, the only familiar faces on the Joe’s team are Channing Tatum as Duke and Snake Eyes. There’s even an early twist that lets the audience know that all rules are out of the window. This is going to be a much different film than the first. 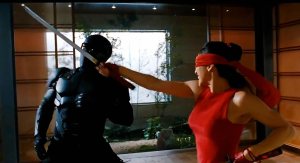 Oh yeah, there’s a red ninja woman in this film, but no one really knows who she is.

Sadly, once the shock twist dies down, we fall back into pretty similar territory. The action moves along too fast for its own good. One moment, we are with the survivors from the Joes, as they plot their advance on the White House and then we are cut straight to Snake Eyes waging a ninja war, alongside the side of a snowy ravine. Although the ravine fight was one of the most visually stunning battles I have seen this year, the audience were so roughly ripped from their comfort zone and thrown into the scene, that we were too disorientated to fully appreciate what we were seeing.

There were moments, when I was reminded of a Mission Impossible movie. The Joes spend a fair bit of the film cleverly breaking into a bad guy base, really using the team to the best of their abilities. However, while Mission Impossible knew the right moments to slow down the action and appreciate the wittiness of the script, the Joes rush through these sequences. It is the same with the fights. They are well-orchestrated, yet it all happens so fast that we have no idea what is going on. The final fight should have had my adrenaline running wild, yet I could only muster a nod of approval. There were moments that could have been so much more.

The reason that it is better than the first, even with the same flaws, are the characters. While the first had lame, bland characters, we are given some new, interesting faces in this film. Dwayne Johnson is the lead man here, as the fantastic Roadblock. He is given the majority of the action, yet never steals the limelight from the other characters. This is the Rock as we have seen him so many times before, but he is a refreshing addition to the cast. Also Lady Jaye is such a better character than the previous women on the teams. She is not given a love interest for the sake of a love interest and is given enough subtle backstory that we appreciate it, but never feels that it is overshadowing the storyline. Even Channing Tatum musters up some charisma, especially when bantering with Dwayne Johnson.

The Rock is credited in this movie as a tank.

Sadly as Zartan is a shape-shifter, we do not see much of the fantastic Arnold Vosloo. Not that Jonathon Pryce is a bad substitute. Pryce has always been good at playing the bad guy (Tomorrow Never Dies, The Brothers Grimm, Ronin), yet this is the kind of script that allows him to have some fun with the role. He is given the best lines and is the highlight of the movie. The new face to the bad guy’s team is Ray Stevenson as Firefly. This is a new kind of role for Stevenson and he definitely has fun with it. The film does suffer the absence of Joseph Gordon-Levitt as the big boss, Cobra Commander. We never get the same awe that we did in the first and the movie suffered for it.

Oh yeah, and then there’s Bruce Willis. Let me warn you: Bruce Willis is in this movie being Bruce Willis. He is pretty much just a famous name to go with the film. But that’s not really a bad thing. He gets enough cool fight scenes to earn his place in the film and one of the funniest moments in the movie was a throwback to the 80s montages, with a Bruce Willis twist. He is not completely forgiven for Die Hard earlier this year, but I am willing to consider it in the future.

Basically this movie is a lot fun, but the action is only ever skin-deep. There isn’t much depth to the movie and sacrifices big explosions for tense scenes. Maybe this film will improve after a few watches, when I don’t feel so thrown every time the scene jumps to yet another character. There is too much going on for me to get invested in what I am watching.

Final verdict: Despite the same underlying flaws, this is a better movie, kept grounded by some decent characters. A definite improvement.

One thought on “GI Joe Retaliation: The Review”