Here we are. After two weeks of trawling through most of the bad guys the Marvel and DC universe have thrown at us, we have come to the best of those villains. In all honesty, you may have guessed who will feature on this list, but nonetheless, I shall carry on. These rogues deserve the glory.

The Green Goblin had the job of pretty much kick-starting the superhero genre. Sure, it wasn’t the first one, but after the awful ‘Batman and Robin’, this film was trying to salvage the genre. Another reason the Goblin ranks so high is because there was so much that could have gone wrong. He is a fairly ridiculous villain to look at in the comics, so it was an inspired move by Raimi to turn this strange bad guy into one of the more terrifying movie villains. 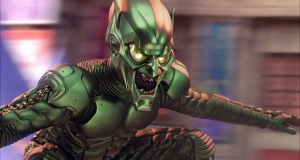 He included the smile with the suit, so he always looks photogenic, when speeding through New York.

This is partly due to Defoe’s performance as well. As much as can be expected from letting Defoe unleash his insanity onto a character, Norman Osborne is brilliantly wicked. He is like a rabid animal in some scenes, cackling into a mirror, as he plots how he is going to kill Spiderman. Then in other scenes, he is in a suit and one of the more charming characters, his only giveaway being the menace hidden in his voice. There is a reason Raimi was so desperate to get his cameos into the following Spiderman movies.

If you are going to cast Liam Neeson as a villain, you already have me hooked. As I have said in another site, this is Neeson’s best performance. He is so sophisticated in his black suit and as he calmly rationalises ripping apart Gotham, it is hard not to get Goosebumps. He is just so in control with his character that it makes it hard not to like this guy, even as he slaughters innocent people.

He isn’t even really the main villain. Sure, he is the mastermind, but he is only revealed to the later stages of the film, meaning that Scarecrow is left in charge with being the face of the movie’s rogue gallery. But when Neeson steps back onto the screen, we have forgotten Scarecrow and are taken aback by one of the best villains to have show up in a Batman movie.

One of the best…

Who the hell is Tom Hiddleston and how the hell did he get this part?

How does he always find time to comb his hair right back?

Obviously now that seems like a stupid quote, because Hiddleston is quite clearly an awesome actor. He has just become the face of Loki, becoming one of the corners of the Marvel villain list (a place that should have been held by Doctor Doom!). Hiddleston goes full English theatre on the role and the character would not look out of place on a Shakespeare play. It brings an old feel to the character, which works well. Loki may be far more technologically advanced, but his close-minded views to being a ruler is what makes his character weak. In ‘Thor’, we are only given a small dose of Hiddleston’s character, but Whedon saw enough to give him a fantastic script to work with in ‘Avengers Assemble’. What follows is one of the best superhero movies in a long time.

I can only hope the writers keep his character relevant in Thor 2. I hope they use him right and not have him in the movie just to keep his fame as audience-bait…

The most modern Superman (not including the awesome ‘Man of Steel’ which we shall be seeing very soon), may have been a disappointment, but the one reason I keep subjecting myself to it, is just to see Kevin Spacey as Lex Luthor. From the very first frame, where we see him claim the inheritance from a rich family, therefore funding his next plot, we are in love with the character. It was a role made for Spacey and he does not disappoint.

Part of me wonders if the new trilogy will include Luther, although I cannot see how they can skip over him. If so, they will have a hard job of topping Spacey. Part of me wants Spacey to return, although I think his version of the character suited the slightly comical edge to this movie. He could keep his cool without ruining his character with a throwaway joke. It looked normal on him. It is another reason I am getting excited to see the actor in new series, ‘House of Cards’.

Magneto was quite clearly going to get into the top 5. He somehow keeps his novelty as a recurring villain without losing his edge. He needs to be, because McKellan has become one of the key faces from the X-Men movies. If we do not see his character in the movies, it instantly loses some of its appeal.

Some of the lines are fantastic for the character, like when he calmly explains his rationalisation for killing Rogue to the girl, herself. He is a character so confident with the role that we instantly believe that Magneto could easily overcome the X-Men. Even in X2, when the script decides to take the cheesy ‘let’s team up with the good guys’ route, McKellan keeps it from the eye-rolling tone. A wonderful performance.

“Speak of the Devil and he shall appear.”

Bane is another character who splits the audiences in two, some infuriated by his voice. Personally I cannot get enough of the character. His voice and mask are one of the key features of the movie: the second you hear the voice, chills creep along your spine and you know that something awesome is about to happen. Tom Hardy is at his best here and I never understood how someone could not like the performance.

Bane could have gone so wrong too. The second Nolan released the news that Bane was taking up the head villain role, people rolled their eyes and criticised the decision, instantly thinking of ‘Batman and Robin’. We were all so wrong and that was proved when Nolan gave us a fantastic muscle-bound juggernaut of a character. We genuinely believe that he is the only character in the films (maybe in cinema history), who can kill the Batman. And when you make us fear for the Batman’s life, you know you have come up with a fantastic villain.

I have always loved Mystique. Everything about her screams awesome. The coolness of her walk (bitch have swag!), the coldness of her character… everything is put to perfection. Sure, she has mutant powers, her weapon of choice being shape-shifting, but I love how that isn’t even her strong suit. Her really talents come from her gymnastic fighting capabilities and her computer-hacking skills, two attributes she had before she became a mutant. It just adds another level to her character and it makes her all the more awesome.

The writers obviously realised that too, when they were writing ‘First Class’. Then we are revealed the shock twist of Mystique and Charles Xavier being old buddies, when they were younger. Mystique was pretty much Xavier’s first student, until she was corrupted by Magneto. Now, when I watch back the old films, there is another dimension to the characters. While these fights are being waged, there is a broken friendship between the two characters. It is an additional part of the story that just blows my mind every time.

Everyone loves Ledger. His Joker is so creepy and sinister that it is impossible not to love him. His character is given a fantastic script, squeezing every drop of villainy out of his character. It truly is mesmerising to watch; you are just captivated by Ledger giving a heart-stopping performance (too soon?), unable to believe how fantastic an actor can be. When we think of Nolan’s trilogy, we don’t think of Batman, Gotham or the Batmobile, we think of the Joker smirking, while slice a man’s face open.

It is sad that Ledger died when he did. This performance proves that he was an actor who hadn’t even reached his peak. Sure, he was always awesome, but the Joker proves that he could have been one of the greatest actors of our generation, maybe even rivalling Leonardo Di Caprio. A sombre tone to end this list on, but a point I wanted to make nonetheless.