The Oscars have passed now and everyone has gone about their business, thinking they have done their annual ‘giving actor’s too much credit’ thing. However, seeing as my blog pretty much revolves around that subject, I am denied that luxury. I have decided to keep the topic at least slightly fresh and turn to the world of television and admiring the performances we can peruse there. Of course, I cannot cover them all, but I have included the three that I think deserve recognition. Please leave any other actor you think deserves more credit in the comments below.

Thank god, my blogs are written and not video blogs, otherwise that name would have just screwed me over.

Of course, every actor in anything Joss Whedon has done deserves credit, as the writer can squeeze the best out of his onscreen characters. However, Enver goes above and beyond the call of duty with his role of Victor, one of the ‘dolls’. All of the Dolls have their work cut out as an actor. Simplifying the plot of the show, each week a new brain is fired into their bodies, meaning that they are essentially playing a new character, each drastically different from the last, every episode. Lead star, Eliza Dushku deserves credit for portraying this in a more subtle sense (you can tell when she is playing someone else by the subtle details: the look in her eyes, or the posture of her shoulders), yet Enver throws himself head first into each roles. 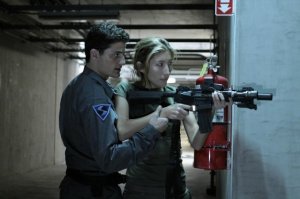 Pssst. Whatcha doing? Who you shooting at?

For one, the guy embodies each personality amazingly well. Despite the audience knowing him as the vacant-minded Doll, he nevertheless, convinces each week, as a serial killer, a hard-nosed detective or even Fran Kranz. It got to the point, where my favourite part of the show was seeing what Enver would be doing this week. I have always been surprised that I have not seen this actor in more things. He reminds me a little of Joseph-Gordon Levitt.

Zachary Quinto has had a fair lot of credit for mastering the role of the villainous Sylar, seeing as it is one of the reasons he bagged the role of Spock, yet I feel that he is due some more here.

Sylar is one of the more interesting characters in the series. He is, for all intents and purposes, Heroes interpretation of a super-villain, yet he never comes across as cheesy or a megalomaniac. There is an air of mystery about the character: he becomes a very real threat to the characters of the series, accentuated by Quinto’s plain creepiness. When we are first introduced to him, he effortlessly strikes us as the psychotic serial killer type.

His motives are the interesting thing. He begins his journey into evil out of mere curiosity. Zachary Quinto becomes a master of the ‘eyebrow acting’, expressing cold intrigue throughout his origin story. Then he settles into more familiar villain territory by adopting this sense of true belief that he is superior to the human race. Quinto deserves a lot of respect for keeping this as realistic as the original character. Sadly, the scripts went downhill from the first season, making me think that the character would have been better killed off. Quinto kept Sylar as real a threat as he could under the circumstances forever and he becomes a welcome addition to this list.

While watching Bill Pullman play the sleazy and nasty character of Oswald Danes, it occurred to me that the actor has handled two sides of a long spectrum. He has played the perfect president in Sci-Fi flick, ‘Independence Day’, and here, in Torchwood, he is given the role of the paedophile. He has played the best of society and the worst. It is an impressive thing to put to his acting CV. 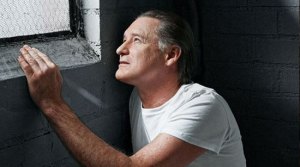 But we all wanted to see him break into a musical number.

First of all, it is a surprise to even see the actor in the role. Bill Pullman is a Hollywood star, so it is unusual to see an actor of his stature venture onto the small screen. I think it always comes across as humbling. I like to think that an actor seeks out the best roles and not the ones that make the most money. However, even more impressive than a major actor delving into television, is the fact that an established actor even considered the idea of playing a paedophile. Rarely has a famous actor accepted such a nasty role, so I was pleased Pullman felt confident enough to take it.

It’s not just the fact that a movie star took a TV role though. Pullman pulled it off magnificently. At points in the series, I found myself rooting for his character and even pitying him. The writers made me side with a paedophile. Pullman handles each emotion from the character well, giving the audience regret, silent contempt and the subtle pleasure as he watches the world fall to pieces. He was the best thing about the fourth season of Torchwood and I have, since the season ended, had an eye out for this actor in anything else since. It was a phenomenal experience watching him onscreen.