I don’t like chick flicks. I find them repetitive, revolving around either getting someone or keeping someone and they very rarely venture from that storyline. For this reason, I tend to avoid them, but that doesn’t mean that I don’t like love stories. No, in fact, I reckon a love story can take a good storyline and elevate it to a great one. Below are some of my three favourite love stories in films that aren’t even about love.

The Next Three Days is a film starring Russell Crowe, Elizabeth Banks and Lennie James (Liam Neeson is also on the cover, even though he only turns up for a minute). It is the kind of film that has a fantastic final 45 minutes, but kind of drags its feet for the rest of the film’s running time, trying to find a way to build up to the climax. That’s not what I want to talk about however.

Russell Crowe never really got the whole ‘look unsuspicious’ idea of being a criminal.

The plot is basically a woman getting arrested for murder and her husband, Russell Crowe, tries to get by without her, fails and ends up, hatching a complicated scheme on getting her out of prison. It’s touching that he would go to any lengths to get her back. Although, we could argue he is a selfish character for wanting that, there is also the sense that he is also doing it for his son, wanting a proper family. Therefore, he risks everything to get his wife out of prison.

That is a fairly decent love story. But it doesn’t stop there. The really powerful thing about the whole relationship is that we, nor Russell Crowe, never find out if she is guilty or not (not until the last few shots of the film). When the topic is brought up, both Russell and his wife (Elizabeth Banks in the best role of her career), awkwardly dodge the question. This suggests that he is willing to throw everything away for a woman who may or may not be a killer. That, ladies and gentlemen, is love.

Brick is the early film by Rian Johnson, which is pretty much a cross between a noir detective flick and a high school movie. The protagonist, Brendan, is the school’s outsider, cool in his own way, but socially inept. We never see him in a relationship with the love of his life, Emily; we only hear about it from the majority of the characters after the break-up. We get the impression that they wildly loved each other, but Brendan was too new to the idea of a relationship and let her get away.

Brendan lives, knowing he threw away love, quietly absorbing his guilt, but always ready to do anything for Emily. And then she is killed, throwing Brendan into an a quest to bring her killer to justice. Emily is the topic on everyone’s lips and every time one of the characters slanders her in front of him, we see the look of quiet disgust, that the actor in question, Joseph Gordon-Levitt, does so well. This is a man destroyed by love, but still willing to fight to uphold its honour.

Up is a fantastic piece of cinema in so many ways. It is so moving, yet laugh-out-loud, throwing the audience from one extreme to the next, a momentary case of bi-polar, in some senses. In the centre of the action, we have the unlikely hero, ageing loner, Mr. Frederickson, who just wants to live out his last remaining years in peace, living in the fond memory of his late wife, Ellie. 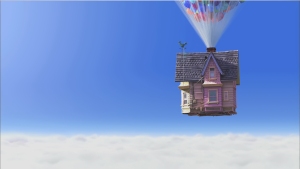 Pixar’s romantic take on ‘Cabin in the Woods’

As kids, they dreamt of being explorers, like their childhood idol, Charles Muntz, and Ellie, as a kid, makes Frederickson promise to take her to the uncharted lands of Paradise Falls. Of course, marriage, flat tyres and broken legs get in the way and before they know it, Ellie has passed away and it’s too late (I promise you, this film is mostly a comedy, even if it doesn’t sound like it).

And that’s the touching thing. Frederickson goes throughout the whole film believing he has failed his wife. He sincerely thinks that she died disappointed in him and it tears him apart. Not till the very end of the film does he find the photo album she left behind, explaining that spending her life with him was the real adventure.

God, I am getting teary just writing about it.