Finally we are here. At the end of my three week analysis into the singles that Great Britain has decided deserve nominations for the best track that our country has to offer. Surprisingly, or not so surprisingly depending on your opinion of modern music, the majority haven’t really been mind-blowing songs. Even the good songs don’t seem to be in the Best of Britain category. The only stand-out tune at the moment appears to be Labrinth’s ‘Beneath Your Beautiful’. Here are the final five and afterwards I shall tell my favourite of the fifteen and give my reasons why.

Emeli Sande jumps onto the list for the second time, this time with her own track ‘My Kind of Love’. Emeli Sande, for me, is the breakthrough artist of the year, each one of her songs fast becoming a ballad. Before Emeli and Adele came along, I thought that power ballads were a thing of the past. I am glad to have been proven wrong. ‘My Kind Of Love’ is the kind of track that should instantly be propelled into the classics. It is beautiful, harrowing and a fantastic piece of music. It is the most deserved nominee yet.

Rita Ora: the least likely person to need a megaphone… ever!

Thankfully Rita Ora is allowed two tunes into the nominees, as RIP is an underwhelming example of her aptitude with music. ‘Hot Right Now’ was an instant hit from the start: the kind of tune that went viral the second the Youtube clip was released. DJ Fresh delivers his usual brilliance: a jumpy, summer track, that like Rudimental and Robbie just slaps a big, goofy grin on your face, when the DJ starts playing it.

Sadly, it kind of got old fast. It’s the kind of tune that is incredible for a month and then the craze dies down to, pretty much, nothing. Don’t get me wrong: I still love this song, but I am surprised it was considered as the single to represent Britain this year. It would be a surprise if it claimed the top spot.

This is the kind of duet I love. At first, it raises eyebrows, but after you hear it, you feel guilty that you never considered it before. Chris Martin and Rihanna have fantastic vocals, to the point where it is impossible to decide which one is the better singer. I am glad that Coldplay led the song with their own genre of music, as I can’t see Chris Martin keeping up with a club beat.

Hey Rihanna… the closer our foreheads are, the more intense the song is.

I love this song so much it is the most played on my iTunes right now. It always seems like a good moment to play this song: in the background while I work, when I want to just listen to music in my spare time. I am not sure how much longer I can sing my praises about this song: it is a well-deserved nominee.

Alex Clare has split people in two. A lot of people hate this song: it is a sign of the rise of dubstep into the charts. It was also the top song for adverts on the TV: most of us discovered this song from the Internet Explorer ad. Therefore, by the end of its reign in the charts, we had all got a little sick of it. However, then there are the people that still love this song. The vocals, the beat, the epic feel to the tune.

I am one of the latter. This song just creates a moment. It’s the kind of song that I like to play just before a night out: it kind of makes you want to get up and moving, even if it isn’t the obvious choice for a euphoric song. I also like the stripped back style of it. It is dubstep, taken back to the very roots of music, broken up by some acoustic guitar and a voice that wouldn’t be amiss singing a ballad. It is almost as though Alex Clare is showing us that dubstep isn’t a talentless genre: it can be used to make some great music. And if we get more songs like this, then I am willing to agree with his argument.

Of course, this song was going to be nominated. One: it is Adele. She has become the gem of Britain. Two: it accompanies one of the greatest films to come out of Britain in 2012, the return of the legendary James Bond. That gives it the sense of being an epic piece of cinema history, which resonates as you listen to it. And three: it is a fantastic piece of music, even if there was no 007 attached to the back of it.

And it was always going to be. Adele effortlessly hits every note required of her, creating a dark, atmospheric song that fits so perfectly into the tone of the film. It is a welcome entry into the nominees. Sadly, it’s not all compliments: Adele’s ‘Skyfall’ falls down in the sense that we cannot help but compare it to the other Bond songs. Adele puts up a valiant fight with this song, but she cannot conquer the history of James Bond tracks she is up against. Yes, there have been better songs than Skyfall (maybe as recent as Chris Cornell, but that is my personal view), but Adele still deserves credit for accomplishing this fantastic piece of British music.

AND THE WINNER IS:

EMELI SANDE – MY KIND OF LOVE 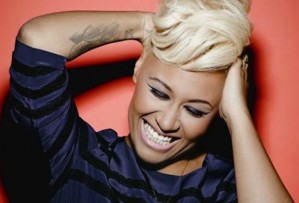 I knew she had to screw her head on each morning.

It was a tough call to make. This week’s article threw several last minute contenders into the mix. My choice was partly made because Emeli Sande has two entries into the nominees, but also, because she is the one to watch for 2013. Her last album is beautiful, a holistic work of musical art. She just adopts her music so freely, pours her emotions into the song and creates beautiful pieces of music.

So well done, Emeli Sande. You have the Oracle seal of approval. I am sure this means so much to you. I mean: the BRITs! Does anyone even care anymore?