The magic of cinema can be a crafty trick. Sometimes we are so swept up in the movie that directors can get away with making terrible decisions. Movie fights can get away with a lot of mistakes: sometimes the idea of the fight is so awesome, it overtakes the fight itself. For example, we were so excited to see Batman fight Bane in ‘The Dark Knight Rises’ that we overlooked the fact that most of Bane’s punches hit thin air. However, it is rare that this trick manages to get away with it on a second viewing.

Below are three fights (that although were mind-blowing first time around), I slowly realised were either cop-outs or just plain ridiculous. If you feel that I am being harsh on a certain example, feel free to defend the moment in the comments below. Or, you could add your own fights that you feel get far too much credit.

As I have mentioned before, ‘X-Men: The Last Stand’ wasn’t the most successful movie. Part of the reason I dislike it is because it got rid of my favourite villain (and a lot of other people’s), Mystique. She is awesome, because although she has one of the best powers, her real skills come from her gymnastics and computer skills, meaning that she is so much more than a mutant with a grudge. Also, her character is so complex (one reason the comic book canon was messed around slightly to include her in ‘First Class’), making her an interesting character to build on-screen. 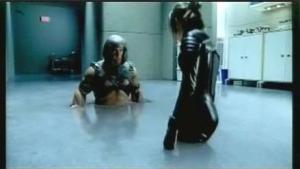 Damn, I picked the only picture in the whole of the internet where the Juggernaut looks like a whiny dwarf!

However, in return for getting rid of her, ‘The Last Stand’ gave us Juggernaut, another villain that is loved by fans of the comics. Even those unacquainted with the graphic novels were impressed by the character: he was strong, funny and promised a good final fight. When it came to that final fight, Juggernaut ended up facing Shadowcat, who is hardly the most impressive of the X-Men team. However, the fight was quite amusing, watching the biggest villain get outmatched by the skinny teenage girl.

Why it was disappointing:

Juggernaut was wasted. OK, I can see the moral behind the fight: it doesn’t matter how small you are, you can still take down the biggest enemies. However, that moral isn’t exactly exact, so film-makers had to come up with a witty way around it. And yeah, it was funny, but after a while, it sinks in that Juggernaut could have been used in much better ways (I wanted to see Colossus take on Juggernaut). You could even still have the Shadowcat moment: there were plenty of nameless bad guys that could have faced off against Shadowcat, who were still fearsome enough for the moral to count.

2 – ARAGORN TAKES ON THE URUK-HAI

Everyone loves Lord of the Rings, especially Aragorn, who just represents awesome in every sense of the word. He is dark, strong and nearly unbeatable. One of the coolest moments of ‘The Fellowship of the Ring’ was when Aragorn holds off the advancing Uruk-Hai armies, long enough for Frodo to make his mad dash across the forest.

Why it was disappointing: 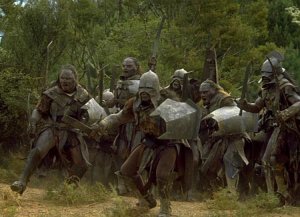 “Just wondering, but does anyone here know how to use a shield?!”

Aragorn should have been torn to pieces! That was the whole Uruk-Hai army standing and Aragorn took them all on. His first swing even takes him through the first two lines of Uruk-Hai, so he should have been surrounded and stabbed in the back. Rewatch that scene: Aragorn is pretty much committing suicide here.

Luckily, the shot cuts away to the rest of the characters, before the madness of the moment can sink into the audience. However, the fact still remains that not one of those hundreds of Uruk-Hai managed to bring down one guy: no matter how awesome he is. The sad part here is that Peter Jackson pretty much condemns the Uruk-Hai in this moment. Up till that point, most of the Isengard scenes are telling us how awesome these Orcs are going to be, when the Fellowship meet them. But after this fight, we are unable to take them seriously any more.

They only manage to kill Sean Bean, who is contracted to die in every film he stars in anyway!

When we got Yoda in animation for the first time, George Lucas must have been unable to resist this fight scene. The films have built Yoda up to be the ultimate Jedi for ages now, implying that he is stronger than Obi-Wan, Mace Windu and any other cool character we have seen. Sure, he isn’t much to look at, but we assumed, he was awesome, when it was needed.

And then Lucas gets a chance to use him. Count Dooku easily defeats both Obi-Wan and Anakin, making it look like the end for those two characters (not an easy feat, as they both appear in ‘A New Hope’). But when all hope is lost, Yoda shows up and the most awesome fight occurs. It is so cool, it is hard to figure out what is going on. It is pretty much a blur of green, red and awesome.

Why it is disappointing:

When you watch that again, you can’t help but think: what the actual f***?! Yoda is basically the size of a guinea pig and him jumping from wall to wall, with a mini-lightsaber just sucks all of the tension out of the moment. It is impossible to take the film seriously anymore (thank god, this is the last ten minutes!) I would much rather have Samuel L. Jackson as Mace Windu show up and take care of Dooku, rather than have my perception of Yoda killed forever.